The responses to CESR's call for evidence on the use of standard reporting formats are in, and they contain a mixed bag of answers. Of the 33 responses listed, only 31 appear to be valid (one was obviously misplaced, one materially empty). Furthermore, the categorisation of respondents used by CESR looks arbitrary, which is why we've applied our own.

Essentially, we were curious whether respondents supported standard reporting (Q1), and if so, whether XBRL would be fit for the purpose (Q2).


The responses from issuers (EAPB, EBF, ZKA, DAI) are remarkable in that they focus on the lack of effective standardisation (and thus comparability) in today's corporate accounts across countries and industries, in spite of those accounts being prepared under IFRS. They quote local laws and regulations as inhibitors to effective standardisation, which could not be overcome by simply applying the IFRS taxonomy because it did not provide the necessary local concepts, nor could it be ascertained that nominally identical concepts are materially identical in practice. In my view, these issues are known and need to be addressed by means of an appropriate system of standardised extensions of the IFRS taxonomy.
Posted by Chris at 12/21/2009 No comments: 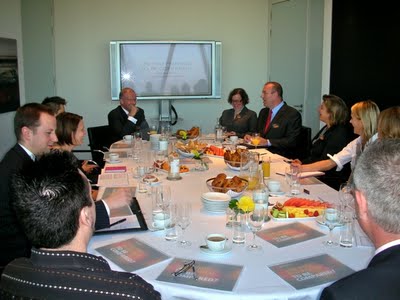 Likemind has produced a nice write-up of the breakfast meeting to which I was invited to present the investor perspective on XBRL to a group of corporate communications professionals on 24 September in London. The event itself was very pleasant with a lot of questions and discussions among participants, and I think this comes across nicely in the conversational style of the paper.

Here are the slides that you see sitting on the table: