26% of the 323 European pension funds responding to Tower Perrin's recent survey say they're currently considering to create a cross-border plan in the next ten years. The main advantages quoted are cost savings, improved governance / control and risk management. Instead of a fully fledged, complex pan-European plan, respondents are looking to implement piecemeal, manageable individual aspects, taking opportunity of many corporate's eastward shift in operations. (IPE)
Posted by Chris at 9/30/2007 No comments:

Email ThisBlogThis!Share to TwitterShare to FacebookShare to Pinterest
Labels: surveys 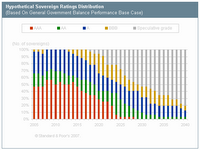 Standard & Poor's has an interesting update of its Global Graying Report, which projects the current fiscal policy stance in conjunction with forecast demographic expenditures to arrive at hypothetical future ratings. It is a pity that Switzerland is missing from the simulations - France for instance goes from AAA today to Speculative in 2040.
Posted by Chris at 9/22/2007 No comments:

Well known Swiss accounting and pensions expert Carl Helbling has a highly relevant piece on the valuation of Swiss pension schemes. In it, he comes to a rather disturbing conclusion: "Accounting standards IFRS and Swiss GAAP FER are too undifferentiated and can only be a limited basis for valuation [of pensions]." He lists a substantive number of instances, where, for legal reasons, apparent over- or underfundings of Swiss plans cannot be utilised as expected economically. Thus, accounting numbers may be substantially different from effective values.

Now, this is not exactly news as IAS 19 is hardly known to reflect economic reality thanks to its built-in shortcomings. But the instances listed do not even appear to be related to IAS 19 features to start with, but rather to what needs to be considered as accounting artefacts in the light of (legal) reality. One wonders how such numbers can be presented as true and fair?
Posted by Chris at 9/16/2007 No comments:

The Swiss CFA Society claims to be the world's first association of financial analysts to endorse XBRL by making its own financial reports available in that format. As there is still no XBRL jurisdiction in the Swiss market, such endorsement and awareness building is of the essence.
Posted by Chris at 9/12/2007 No comments:

Deutsche Bank Research has a comprehensive piece about sovereign wealth funds, including an overview of the most important funds, their systemic risk factors and of control mechanisms for foreign direct investments. Deutsche asks for increased transparency and a global code of conduct for such vehicles - both highly sensible petitions.
Posted by Chris at 9/11/2007 No comments:

Email ThisBlogThis!Share to TwitterShare to FacebookShare to Pinterest
Labels: investing

CFA Korea Society has been so kind to invite me to talk to them about pan-European pensions and the conclusions to be drawn from European experience in the light of the very recent introduction of occupational pensions in Korea. Here are the slides of that presentation.
Posted by Chris at 9/10/2007 No comments:

A few days ago, I've had the honour to address the first IASCF conference in Asia in Singapore with a presentation about the CFA Institute's Comprehensive Business Reporting Modell in its final version.
Posted by Chris at 9/10/2007 No comments:

The Federal Office of Statistics has published key figures about occupational pensions in Switzerland. Unfortunately, the latest numbers available date back to 2005. Nevertheless, it is interesting to note that the 2nd pillar's assets have grown to over CHF 540 bio by 2005. That's 117% of GNP. Since 2000, the number of iorps has declined by 19% to 2770. The average number of members per iorp is just shy of 1200.

These statistics have several deficiencies. Available numbers are not timely. Furthermore, we know little about the effective structure of overall liabilities, nor about interest rate sensitivities of assets.
Posted by Chris at 9/09/2007 No comments: