Europe in a nutshell?

Geneva based Le Temps has an interesting piece comparing IORPs in French & German speaking Switzerland (via Vorsorgeforum). In short, - Altogether, Switzerland may be seen as representing both the anglo-saxon as well as the mediterranean approach to retirement provision in one small jurisdiction with a multitude of (cantonal) supervisory institutions.
Posted by Chris at 3/31/2007 No comments:

Email ThisBlogThis!Share to TwitterShare to FacebookShare to Pinterest
Labels: Switzerland

The UK Financial Services Authority has just issued a paper about risks and challenges in the growing commodities investment segment. Most of the paper is a wrap-up of conventional wisdom, but it is nevertheless worth mentioning that the FSA recognises the wide use of algorithmic trading (with associated technical risk) and that, surprisingly, UK pension funds are barely invested in this asset class to date. Consequently, the consensus view is that the growth of portfolio investment in commodities is set to continue.
Posted by Chris at 3/28/2007 No comments:

Sometimes, Poland can be a confusing country, especially when it comes to pensions. Therefore, it is valuable to have the occasional helicopter view paper, such as the IMF's recently published Technical Note on Competition & Performance in the Polish Second Pillar. The paper contains a description of the structure & function of the Polish retirement provision system in general and the second pillar in particular. That's where appearances can be confusing: The Polish second pillar is evidently not equivalent to occupational pensions in the sense of the Pensions Directive, which is why the Directive's investment guidelines are not directly applicable. Nevertheless, the systemic home bias of the Polish second pillar remains an issue, probably even a self-reïnforcing one thanks to the considerable asset accumulation in the industry. epn also has an interesting piece covering that issue.
Posted by Chris at 3/27/2007 No comments:

IPE reveals that Iceland is the latest (and last) EEA country to adopt the Pensions Directive into its national body of law. It will be interesting to observe how Iceland proceeds with the transposition given the Belgian example. The Icelandic Association of Pension Funds will certainly provide more background.
Posted by Chris at 3/26/2007 No comments: 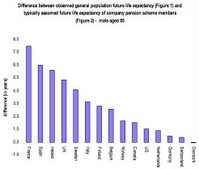 Today, the 7th Annual Conference of the IEBA has been brought to my attention because of its several presentations about pan-European pension funds (scroll down to Past Events).

While the presentations themselves did not strike me as out of the ordinary, I noticed the slides of an earlier event about mortality assumptions used in the EU. The slides present a good overview of this important paper. Most notable is the slide shown on the side. It displays the difference between observed and assumed future life expectancy of pension scheme members across a number of countries. The difference varies widely with Denmark, Switzerland & Germany showing the slightest differences whereas France, Spain and Ireland have the most "longevity reserves" built into their mortality assumptions: a plan using French mortality assumptions will show considerably higher liabilities than the same population of beneficiaries subjected to Danish assumptions.
Posted by Chris at 3/23/2007 No comments:

The Committee on the Global Financial System hosted by the BIS recently published a paper on "Institutional investors, savings and asset allocation". This paper tries to assess the impact of ongoing regulatory and accounting changes on the behaviour of institutional investors, whose assets under management are seen as rapidly catching up with those of the banking system, therefore warranting central banks' interest with a view to the stability of the financial system. The impact of regulatory changes on market rates and asset prices is another important consideration. The report's main theme is the ongoing transfer of risk from institutional balance sheets to the household segment.

Two side notes on Swiss pension funds: Available information about their assets & allocation is two years older than other countries', and their equity exposure is considerably below average.
Posted by Chris at 3/13/2007 No comments:

Last Tuesday saw an interesting convention on the shores of lake Geneva at the sumptuous estate of Baron Rothschild and his company. The topic of the well attended conference was pan-European pensions in general and the Belgian incarnation thereof in particular. The list of speakers could not have been of higher calibre: The Prime Minister together with two cabinet ministers and high level representatives of the EU Commission and the Belgian pensions supervisor. Their objective was to introduce the Belgian legal framework for the newly created legal entity Organisation for Financing Pensions (OFP). They did this quite effectively, albeit on the only neutral territory in Europe where the Pensions Directive is not applicable.

The OFP seems to be a highly attractive entity to provide pan-European pensions with. It operates on zero (income, capital, VAT) tax, it can provide solidarity across several pension plans (which is attractive for efficient capital allocation), it reflects no other restrictions on asset management than the Directive's prudent person principle, it may rely on Belgium's extensive network of double taxation treaties, it takes advantages of Belgium's recent transition to EET, it is not encumbered by a Pensions Protection Fund levy and last, but by no means least, the valuation of its liabilities may be based on a discount rate that incorporates expected returns, thus may go as high as 6%. A word of caution may be in order here, though: It is not clear whether the long term consensus expected return used to derive that attractive discount rate takes into consideration recent literature on the proper calculation of expected rates of return.

Jean-Pierre Steiner of Nestlé Capital Advisers shed some cold water on participants' hopes that pan-European pension plans might fully replace local plans in the near future. In his view, this is an ambitious long-term objective reaching beyond his active lifetime. Nevertheless, he put Nestlé's considerable weight behind the support of Belgium as the currently most attractive location for pan-European pension funds.

Also of interest was Mr Van Hulle, the EU Commission's representative's comment that he wasn't opposed to supervisory shopping, which is of course tantamount to regulatory shopping - something that tends to be frowned upon elsewhere. Equally interesting to Swiss listeners was Mr Wymeersch's note that Belgian first pillar institutions may be falling under the Directive, which seems to be in direct contradiction to the Directive's scope and is of particular interest to Liechtenstein as well.
Posted by Chris at 3/12/2007 No comments: