The Economist has a summary of the recently published Annual Survey 2006 of Accounting For Pensions UK & Europe by actuaries Lane, Clark & Peacock. Unfortunately, the summary only covers the British part of the survey, which continues the proud tradition of differentiating between the UK and "Europe". 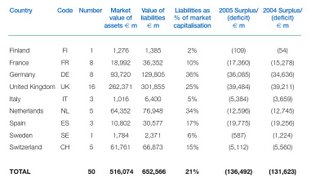 LCP has surveyed the component firms of the DJ STOXX 50 index. While the disclosure quality has risen overall, it is not yet at the same level as the UK's, which has been substantially improved following a recent appeal by financial analysts based in London. A similar appeal obviously is required at a pan-European level now! The common denominator of the survey's findings is that despite of a considerably more narrow basis of reporting standards (from 12 sets down to 4), the amount & quality of information vary as widely among the sample as the material information itself, as can be seen from the interesting table above (click to enlarge). Strangely though, an entire section of the report is dedicated to to the analysis of an unadjusted corporate average deficit per country. This ratio does not seem to have any relevance whatsoever.
Posted by Chris at 8/04/2006